In 2016, she became the first woman to win in the Irish Touring Car Championship, taking victory in the Production Class in her Honda Integra.

She has subsequently raced in Global GT Lights, Stryker Sportscars and the UK based Citroen C1 Challenge. Nicole is the only Irish Ambassador for the International Sean Edwards Foundation, with whom she tested a Porsche GT3 Supercup in Le Castellet in 2016. In 2018, Nicole raced in the Irish Stryker Championship, running at the front all year with a number of podium finishes. She is also the reigning Class 1A Endurance Trial Champion, having taken the title in both 2018 and 2019.

She has driven Formula 1 cars twice, the iconic Guinness March 811 at Mondello Park in 2019 and the Jordan 193 at Palm Beach International Raceway in Florida in February 2020.

Nicole is an Ambassador for the Sean Edwards Foundation, 20×20.ie, and Formula Female, the initiative set up by Irish Hockey Star Nicci Daly to attract more females into Motorsport” 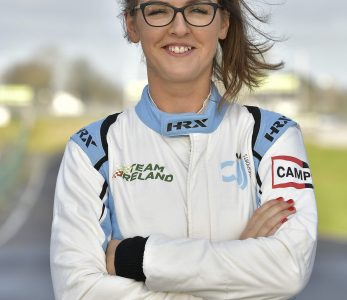