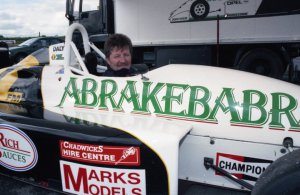 Posted at 08:00h in Motormouth, News by Nicole 0 Comments
0 Likes

Well it’s all good news this week in Irish Motorsport. The Donegal Rally team have secured a three year deal with Joule– manufacturers of solar panels, tube systems and hot water cylinders, which is great to hear. Also, Oisin and the team at the SEAT Supercup Ireland have managed to attract the backing of SEAT Ireland for their new series, which is a good thing, not only for them, but for Irish Motorsport too. this is the first manufacturer backed race series since the Fiat Punto Abarth Cup was launched in 2002. Coincidentally, Oisin was the championship manager for that series too! The Fiesta series have done a deal for title sponsorship with Blackchurch Motors, the ITCC have micksgarage.com onboard too and in an innovative move, Ginetta Junior Ireland have attracted support from the Leinster Motor Club!

Vivion Daly was a man who knew how to give value to his sponsors- 20 years ago!

Many drivers think that a class or championship title sponsor does not directly affect them as they still have the same costs they had previously- entries, test fees, tyres, fuel etc- but this is not really the case. Once a sponsor comes onboard for a championship, the class gets a higher public profile. Also, the pennies added to the coffers often pay for PR and TV coverage for the class. These are added benefits to any driver or team to sell to their personal potential sponsors. If your class is televised, then there is automatically a benefit to anyone who might sponsor a car or team.

Another common misconception is that you just take the money and bang the stickers on the car and off you go. Believe you me, this is not how sponsorship works- especially in this modern age of digital marketing. Put yourself in the shoes of a marketing manager or small business owner- which would you rather do- give a driver €3,000- or spend it with a digital media agency or even on Facebook ads or Google Adwords? Which would give a better return? No prizes for answering that one lads! Whilst studying sponsorship recently, I came across this quote, which I love:

“No matter how many races and championships you’ve won in the past, or how much faster you are than the competition, no company is going to give any amount of money to something that doesn’t have a strategy to produce a return on investment.”

Have a think about that one. If you were a business owner, would you sponsor your race or rally car, or a similar one? Is it money well spent? The initial answer is no- in fact in many cases you may as well flush the

You will have to persuade your potential sponsor that your proposal is better than all of his other options.

money down the toilet. It’s not all bad news however. Once you have changed your viewpoint, and put yourself in the shoes of a potential sponsor, then you have made the first steps towards chasing a sponsor. Let’s imagine though, that young single seater star Joe Bloggs manages to attract sponsorship from an FMCG company. A domestic detergent brand for arguments sake. Joe gets €10k and tweets and posts on social media and even sends regular updates to me here at Motorsport.ie (heaven forbid!). Make no mistake that the Marketing Manager of that company will have to explain where that money went from the budget and more importantly, how many more packs of their product did the Joe Bloggs deal help them sell. Our Marketing Manager will more than likely be studying his shoes intently towards the end of that meeting. I am, of course, generalising hugely here and also looking at a the worst scenario.

It is not all bad however, there are some options available and I will delve into these in part two of this article- coming soon on Motorsport.ie

We use cookies on our website to give you the most relevant experience by remembering your preferences and repeat visits. By clicking “Accept All”, you consent to the use of ALL the cookies. However, you may visit "Cookie Settings" to provide a controlled consent.
Cookie SettingsAccept All
Manage consent

This website uses cookies to improve your experience while you navigate through the website. Out of these, the cookies that are categorized as necessary are stored on your browser as they are essential for the working of basic functionalities of the website. We also use third-party cookies that help us analyze and understand how you use this website. These cookies will be stored in your browser only with your consent. You also have the option to opt-out of these cookies. But opting out of some of these cookies may affect your browsing experience.
Necessary Always Enabled

Performance cookies are used to understand and analyze the key performance indexes of the website which helps in delivering a better user experience for the visitors.

Analytical cookies are used to understand how visitors interact with the website. These cookies help provide information on metrics the number of visitors, bounce rate, traffic source, etc.

Advertisement cookies are used to provide visitors with relevant ads and marketing campaigns. These cookies track visitors across websites and collect information to provide customized ads.

Other uncategorized cookies are those that are being analyzed and have not been classified into a category as yet.