How to win The Walter Hayes Trophy- with Wayne Boyd 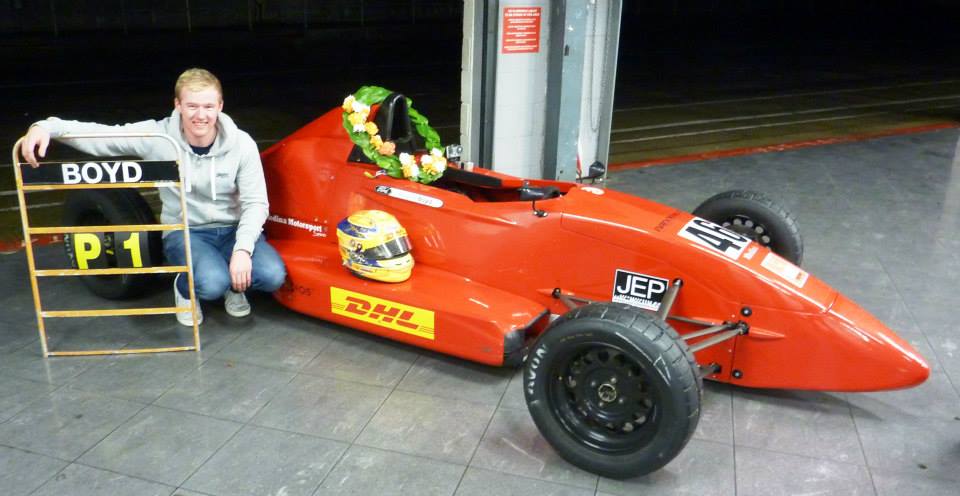 Having shown such good pace at the Formula Ford Festival, qualifying pole for my heat, winning theheat with fastest lap and subsequently leading the semi final comfortably after lap one only for the damper pin to break, myself and the guys at Medina Sport came into the Walter Hayes Trophy event hungrier than ever.

Testing went well on Thursday & Friday, with the conditions being very mixed it was hard to compare sessions and as we learnt from the Festival a week previous, you have to ignore all the F3 times people put on their pit boards….So going into the last session on Friday we were happy just to bed in tyres when we had an issue with the engine, not great timing but we were able to get it sorted.

I was in heat 4 and the track was still wet for quali on Saturday morning. We knew we had good wet pace and qualified on pole by nearly a second from current formula ford champion Jayde Kruger. The track dried out for the heat and I made what I thought was a good start but somehow dropped to 3rd by the first corner, wasn’t quite what I had planned. I got back into the lead into Becketts on lap 2 and just kept an eye on my mirrors for the rest of the race taking no risks to bring it home. Our heat was the 3rd quickest of the day which meant I would have a front row start for my semi final.

2013 WHT winner Scott Malvern had the fastest heat and so I would start alongside him.

Coming into the track early on Sunday morning to watch the unfortunate Jonny McMullan and Jack. Finlay in the progression race, the conditions had changed massively to heavy rain. Many others
panicked but myself, John Loebell (Medina Sport owner) and Andy my mechanic were quietly confident. Jonny and Jack both did well finishing first and third, great effort from Ginetta Junior driver Jack for his first time at Silverstone. So the semi final 1 grid could very well have been the final grid with the amount of fast drivers in it. This, if anything, is a good thing because you have to beat them all to win anyway. I made a great start and got alongside Malvern into turn one, he gave me a bit of a squeeze on to the rubber line at turn 1, unfortunately I understeered into him and I came off worst spinning into the gravel trap at Copse.

To make it worse, with all the steering I was doing to keep it out of the deep gravel I had knocked the ignition switch off which I hadn’t noticed. So once I got the car started again I was absolutely dead last, over 30 cars having gone by! Needless to say, a few swear words were used… but we knew we had good wet pace and made our way up to P7 in 12 laps, I was more than happy with that after initially thinking I might not have even made it to the final whilst sitting in the gravel. More importantly we had fastest lap by 3 tenths whilst in traffic…

So the final, starting P14, it was going to be a big ask but I had a gut feeling and I told John it’s wasn’t over just yet! To John, Elaine and everyone at Medina, it means just as much to win as it does to me, so makes you want it even more- to repay them for all their efforts. Lap one I took it easy to be honest, let everyone else go off pushing too hard, which did happen…. Started picking my way up the field and eventually got into the lead with 2 laps to go with Rob Hall right behind me, he was so good through copse and also Becketts, so going on to the last lap when I felt I had a comfortable lead, then he was right on me after copse, bloody nightmare, especially with the rain getting heavier.

He then was able to get ahead of me out of Becketts. At his stage all I had in my mind was win it or bin it, no one remembers who finishes 2nd and I had finished there a few times. So I got a good tow off him and went to the right off him coming into Brooklands, he squeezed me on to the kerb, but left me just enough room, but breaking on a painted kerb in heavy rain isn’t the easiest of tasks on the last lap, but the reason I went right of him was to force him on to the dry line for the corner. So as I struggled to get stopped, he struggled to get turned in so I was able to switch him with a serious amount of opposite lock going into luffield, at that stage I knew we had done it, we were very good out of luffield.

Don’t think I’ve ever celebrated as much in my life on the in lap, milked the life out of it to be fair.

The atmosphere after the race was awesome, the team were as buzzing as I was, few tears were even shed by some people. A true team effort and I can’t thank them all enough, also thanks to DHL, my Dad and everyone else who supports me.