Posted at 09:00h in Inside Line by Nicole 0 Comments
0 Likes

Hi everybody, I’m Gabby McDonald and I’m 21 years old. I am a final year Psychology Student. And for those of you who don’t know me, I am a Top Fuel Pilot. What does that mean, you ask? I drive a 300mph, 8,000 bhp beast called a top fuel dragster.

I’ve been racing since I was 13 years old. I started out in a Junior Dragster and somehow managed to find myself in a Top Fuel Dragster at the age of 19. Most people didn’t think I could do it and a lot of them thought it was stupid of the team owner, Rune Fjeld, to let me have a go. But I think I managed okay. I am currently the first ever Irish Top Fuel Pilot, the youngest licenced female in Europe, along with holding the quickest licencing pass in Europe.

Anyway, as I said previously I started out in junior dragsters. I discovered drag racing randomly while in California 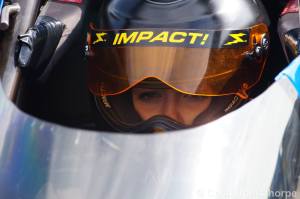 with my parents. I saw four dragsters on a rail and challenged my dad to a race, he himself used to race in Mondello Park in his 20’s. So I hopped into one and fell in love instantly! I grew up in the modelling and acting industry, so cars were never really on my radar, even though both of my granddads collected old cars. I guess I knew then, that was what I wanted to do. A year and a half later I got my Jr licence and began competing in the June of that year. We got a lot of “here comes the Paddy’s!” or “Top of the mornin’ to ya!” or “Potato”. We were never taken seriously really. But that only fuelled me more. I love it when people tell me I can’t do something, because I will always prove them wrong! By the age of 15 people started to realise my ability after I had knocked out the championship leader in the first round and made it to the semi finals.

However, it wasn’t really until the next year that everyone really took notice and really began to respect me as a driver. I had decided then that this year was my year and I was going to come home with a championship under my belt, come hell or high water. And that’s exactly what I did. However, I took home three championships. I became the first Irish person, first female and first non-UK person to win all three championships. I was also the second 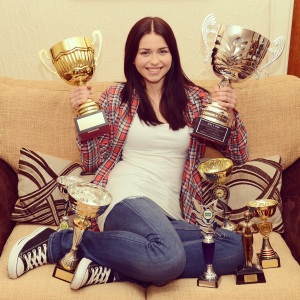 person to do it. I was completely elated! Later that year I made a trip out to the USA to race at an IHRA track called i-57. That was where I met Bob Bode; he is a famous Funny Car driver from the NHRA. He was practically royalty to me. He predicted that within 5 years I would become a Top Fuel Pilot. At 17, I thought he was crazy and said more like 10, but as fate would have it, I drove the beast for the first time 2 years later and finally got my licence at the age of 21.

You may be wondering why it took me so long to get my licence. Well you see drag racing is an expensive sport, and even more expensive in pro classes. When you don’t have sponsors backing you, it can be very hard to make up the money needed. It’s also quite deflating when your own government doesn’t recognise you or the sport you participate in, but I plan to get it recognised one day! So currently I am still looking for sponsorship for this year, to race at 1-3 events this year. If not, I will sit on the sidelines and happily watch. Drag racing is my passion; I could sit watching it all day!

That’s it really for my first blog post. Hope you’ve liked it!

You can keep up with me on:

We use cookies on our website to give you the most relevant experience by remembering your preferences and repeat visits. By clicking “Accept All”, you consent to the use of ALL the cookies. However, you may visit "Cookie Settings" to provide a controlled consent.
Cookie SettingsAccept All
Manage consent

This website uses cookies to improve your experience while you navigate through the website. Out of these, the cookies that are categorized as necessary are stored on your browser as they are essential for the working of basic functionalities of the website. We also use third-party cookies that help us analyze and understand how you use this website. These cookies will be stored in your browser only with your consent. You also have the option to opt-out of these cookies. But opting out of some of these cookies may affect your browsing experience.
Necessary Always Enabled

Performance cookies are used to understand and analyze the key performance indexes of the website which helps in delivering a better user experience for the visitors.

Analytical cookies are used to understand how visitors interact with the website. These cookies help provide information on metrics the number of visitors, bounce rate, traffic source, etc.

Advertisement cookies are used to provide visitors with relevant ads and marketing campaigns. These cookies track visitors across websites and collect information to provide customized ads.

Other uncategorized cookies are those that are being analyzed and have not been classified into a category as yet.