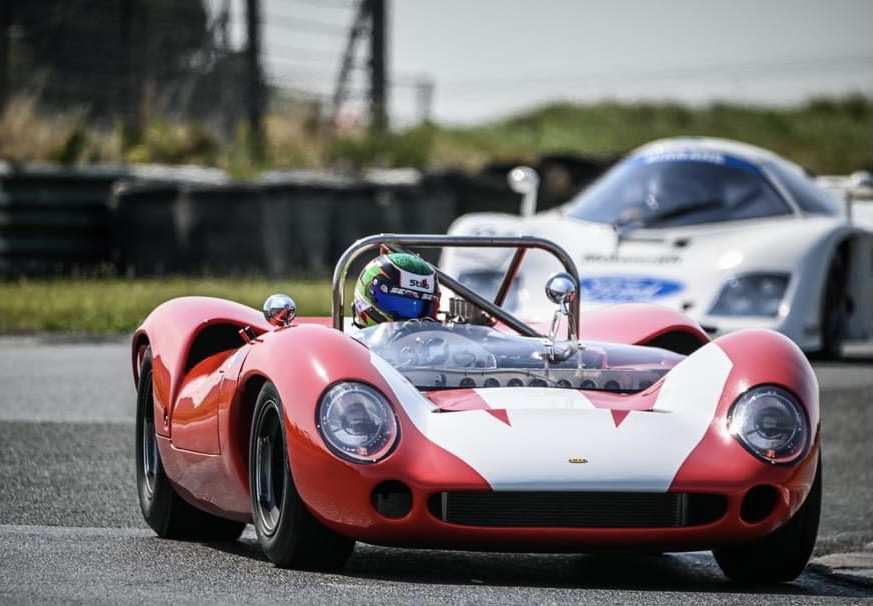 Posted at 11:11h in News by Nicole 0 Comments
0 Likes
Nicole Drought  starred at the hugely successful Historic Festival at Mondello Park last weekend. With plenty of family attractions including live music, a Vintage Funfair and a Street Food area, the event had strong promotion in the weeks leading up to the event, including Nicole’s appearance on Ireland AM the previous Monday, and as a result it attracted one of the largest crowds seen at a race meeting in Mondello for many many years.
Nicole raced in the Pre’55 Class at the wheel of Mick O’Shea’s MGA and despite a few mechanical issues, managed to take third in race one and second in race two.
As well as this, Nicole was invited to demonstrate one of the cars from the priceless Martin Birrane Collection, a 500bhp Lola T70. The rumbling V8 Chevrolet engine thrilled the crowds as Nicole blasted down the main straight. The Tipperary lady drove the car on four occasions over the weekend, accompanied on track by former F1 driver David Kennedy, in the Ford C100 and Ian Beatty in the BMW M1 Procar.
Nicole Drought: “How lucky am I? I had a wonderful weekend. I have to thank Mick O’Shea for allowing me to drive his beautiful MG, I really enjoyed it and to take home two trophies was an unexpected bonus. As for the Lola, it was an absolute honour to be allowed to drive it. I had expected it to be a handful but actually, it was lovely to drive- and what a noise! The crowds made the event though and it was great to meet so many kids who loved the cars too!”

Nicole returns to the UK racetracks this coming weekend, when she will race a 280bhp MINI Cooper S at Brands Hatch.