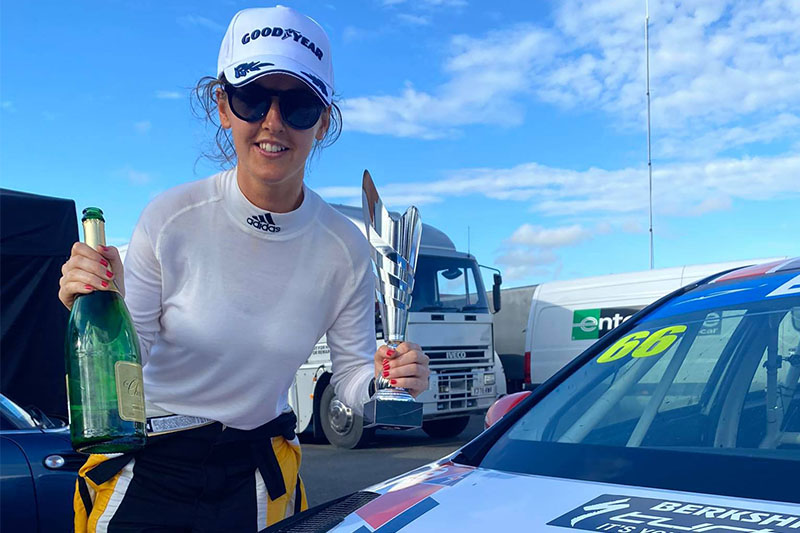 Nicole Drought returned to the Britcar Endurance Series at the weekend in the best possible way. Debuting the Hyundai i30 N TCR in the series, she took victory in class 4, her fourth such win in Britcar.
Having had the opportunity to test the car the previous week, Nicole was of the opinion that it was ultimately quicker than the Cupra she had previously tested, but a bit more of a handful to drive. In consultation with the Motus One engineers, the decision was made to make a few set up changes to stabilise the car through the fast corners.  Having won a Silverstone in a similar car in the TCR series, fellow Irish driver Max Hart was also on hand at the pre race test to offer some pointers ahead of the all important race day. Nicole and her co driver, Danny Krywyj, were dismayed to arrive at Silverstone on race day to be greeted by heavy rain, with all their testing having done in dry conditions.  Nicole managed to qualify the car fifth in class but with the weather drying out, the Motus One pair were quietly confident that they would be in contention before the end of the two hour race.
As fastest driver in qualifying, Nicole was chosen to start the car and was immediately on the attack, becoming embroiled in a hectic scrap with a Ferrari 458 Challenge car and a Porsche 991 Cup machine. Having passed them on numerous occasions, it seemed Nicole had no answer for them as the faster cars blasted by on the straights each time. About half an hour in though, a few drops of rain fell and as this turned to a steady downpour, Nicole despatched both Porsche and Ferrari and quickly closed on the Class 4 Championship leader Peter Erceg, driving his usual Porsche Cayman. After another lively battle, with the pair swapping places on a number of occasions, Nicole took the place and eased clear. As the half way mark approached, with the circuit now dry once again, Nicole was obviously relishing the handling of the Hyundai, setting fastest lap before pitting to hand over to Danny. Despite his lack of experience, Danny drove superbly, snatching the class lead from the CTR-Alfatune Cupra and easing away to take the win. To add icing to the cake, the Britcar Endurance organisers announced Nicole as Driver of The Day after of the race, topping off a wonder return to the series for the Irish driver.

Nicole Drought: “I’m delighted with that, P5 in qualifying was a bit disappointing, but we knew if it stayed dry, we would be in with a chance. I want to give a give shout out to Motus One who did a great job all weekend, especially Tom and Tom, who worked on our car, and also to Danny, who was mega today! This one is for Gem Oils, ITM Digital, Siltex Safety, Joe Mallon Motors and the many other people who support me. Without them I would just be dreaming about days like this!”