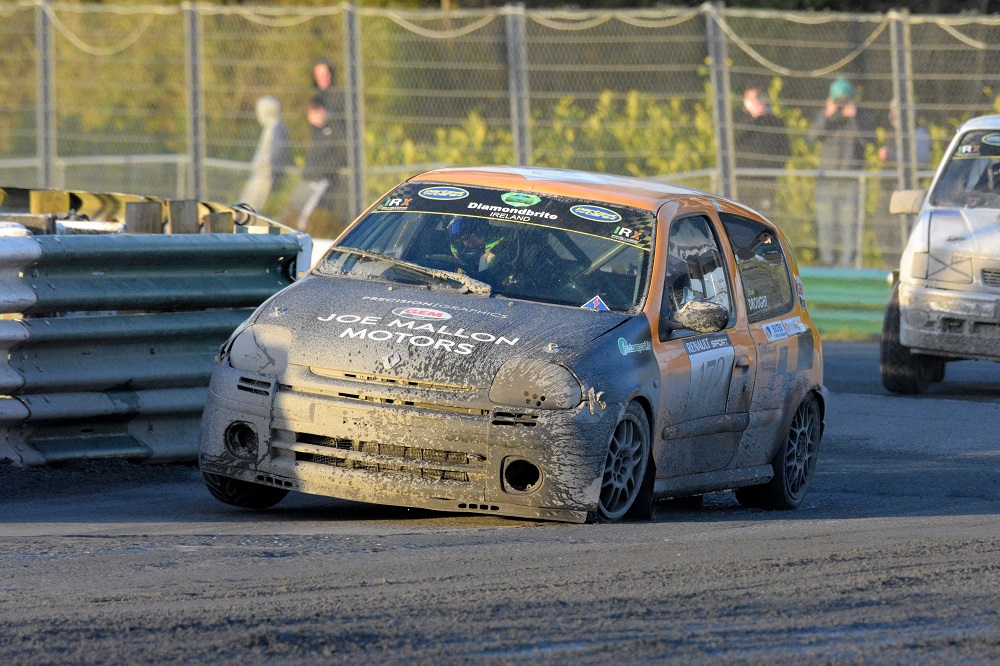 Nicole Drought  added another string to her bow at Mondello Park on Sunday when the Tipperary lady crossed the line to take her first win in Irish Rallycross.
Having joined the series late, Nicole has been right at the front all season long in her Joe Mallon Motors Renault Clio 172, but despite a string of heat wins and fastest laps, hadn’t quite managed to take the win in the all important final.
Before last weekend’s IRX meeting at Mondello, Straffan based POB Racing did a complete checkover and set up on the little Clio and the team were confident of a strong result. Despite a few issues early on, Damen and Loughlin Farrell, who were running the car on the day, made a few setup changes and by the third heat, Nicole was the pace of the class. When the lights went out in the final, Nicole made the perfect start to grab the lead into the first corner and was never headed on the way to a dominant win, crossing the line almost seven seconds ahead of her closest challenger, and claiming fastest lap too. This was the final round of the 2022/23 Irish Rallycross Championship and despite missing the opening round, due to a clashing UK commitment, Nicole finished second in the championship.

Nicole Drought: “I really enjoyed that. We have developed the car all season long and now it is absolutely flying. A big thanks to POB Racing  and to Damien and Loughlin Farrell, and Leo Nulty Promotions for putting it all together- it has been a great season and this was the perfect start to 2023! As ever, a big thanks to Gem Oils, ITM Digital and Siltex Safety, without whom none of this would be possible.”

Nicole and her team are currently working on her 2023 plans, details of which will be announced soon.